Simple I Love You This Much Father’s Day Card – Crafts

Many may think that Father’s day is a recent invention however a day to celebrate fathers is over 100 years old!

The organiser of the first Father’s Day was not a father – or even a man – but an American woman named Grace Golden Clayton. In 1907, Clayton was deeply moved by newspaper reports about a mining disaster which had left 1,000 children in the state fatherless, so she organised an event at her church to celebrate fatherhood.

Although this event was a one-off, 3 years later the idea was quickly picked up by another young woman called Sonora Smart Dodd. Whilst in church she heard a sermon about the increasingly-popular practice of Mother’s Day. Her love for her own father, who had raised his children alone after his wife’s death, pushed her to call for a similar day of gratitude for fathers. She organised a Father’s Day celebration in her hometown of Spokane, Washington, to be held every year on the third Sunday of June. At first, the event was small and fairly low key, however during the 1930’s Dodd and her supporters began pushing for national recognition.

Slowly, the celebrations spread across the country until, in 1972, the US President at that time signed a bill officially making Father’s Day a nationally-observed holiday. By then, Father’s Day was an established tradition in dozens of countries, the UK included.

Father’s Day is celebrated across the World, with most celebrating on the third Sunday in June, however many countries have different dates and customs to celebrate Father’s Day.

In Germany, for example, Father’s Day (Vatertag) is celebrated differently from other parts of the world. It is always celebrated on Ascension Day (the Thursday forty days after Easter), which is a national holiday. It is also known as men’s day or gentlemen’s day.  It is tradition for groups of males to do a hiking tour with wagons filled with wine, beer and traditional food.

A simple card to make Father’s Day special this year:

1. Trace your child’s hand and cut out two copies 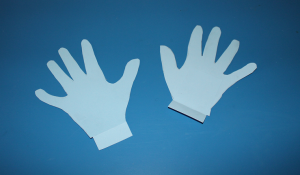 2. Cut out two rectangles and glue these on to the bottom on the hands with a flap on the bottom so that the card stands up. 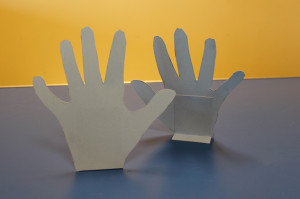 3. Cut out a strip of paper and fold it accordion style with 10 spaces.

4. Add the words “I Love You” on the outside, and “This Much” on the strip of paper. 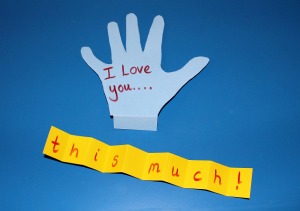 5. Glue the ends of your accordion strip on the insides of the hands and your card is done.

We would love to see how you get on! Send us pictures of your masterpieces on Facebook, Instagram or Twitter and don’t forget to use the hashtag #EYRhub.